The untimely and tragic death of actor Sidharth Shukla on September 2 last week has left the entire nation in a grieving state. Just like all of us, his family is also in shock. Sidharth is survived by his mother, Rita Shukla, and two sisters. The actor died a natural death but his histopathological reports are still awaited. 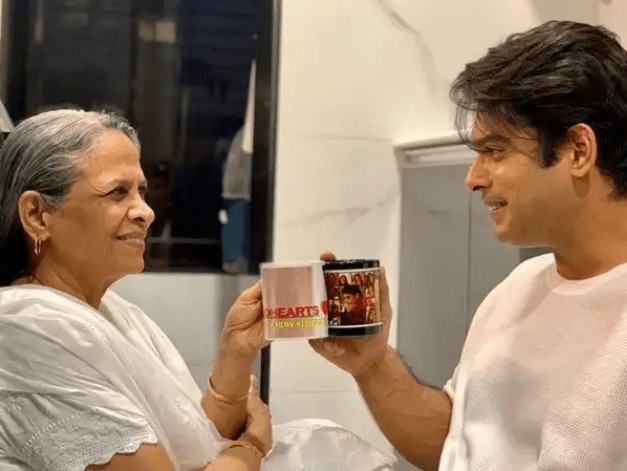 Now, after four days of this unfortunate incident, Sidharth’s family has released an official statement. In the note shared by the late actor’s family, they urged everyone to respect their privacy and allow them to grieve. They thanked fans and well-wishers for their ‘unconditional love. They also expressed gratitude to the Mumbai Police for providing support and security.

The statement reads, “Heartfelt gratitude to everyone who has been a part of Sidharth’s journey and showered him with unconditional love. It definitely doesn’t end here as he now resides in our hearts forever! Sidharth valued his privacy, hence we request you to allow our family the privacy to grieve.”

Further in the statement, it is written, “A special Thank You to the Mumbai Police force for their sensitivity and compassion. They have been like a shield, protecting us and standing by us every minute of the day! Please keep him in your thoughts and prayers. Om Shanti -The Shukla Family.” 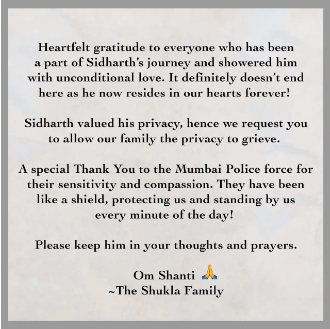 Sidharth was cremated at the Oshiwara crematorium a day after his death. His family and fans have organized a virtual prayer meet to honor him at 5 PM on Monday.

Sidharth forayed into modeling in 2004. He participated in Gladrags Manhunt and Mega model Contest. In 2005, Sidharth won the World’s Best Model contest held in Turkey to become the first Indian to win the title by beating 40 contestants. He made his acting debut with a TV show titled Babul Ka Aangann Chootey Na, in which he was paired opposite Aastha Chaudhary. Later he featured in soap operas like Jaane Pehchaane Se… Ye Ajnabbi, Love U Zindagi, Balika Vadhu, Dil Se Dil Tak etc.

Besides TV serials, Sidharth had participated in reality shows, Khatron Ke Khiladi 7 and Bigg Boss 13, and bagged the trophy from both the shows.

On Sunday ka vaar, Bigg Boss OTT host Karan Johar also paid an emotional tribute to Sidharth before beginning with the episode. The host choked up while talking about Sidharth. He praised the late actor and said, “This is something we are all still finding hard to believe. It is like I am numb, I can’t even breathe. Sid was a good son, a great friend, and just an amazing guy to be around and be with. His positive vibe and that smile won so many millions of hearts.”