Popular TV and film personality Sidharth Shukla’s death shook everyone to the core. His fans are still in a state of disbelief. The 40-year-old actor was cremated at Oshiwara with police security and heavy media presence. The media coverage of Sidharth’s funeral did not go down well with many celebs like Anushka Sharma, Gauahar Khan, Zareen Khan, Disha Parmar, and Kushal Tandon. They took to social media to bring to everyone’s notice that this type of coverage by media portals is ‘insensitive’. The paparazzi was not allowing space for Sidharth’s mother and rumored girlfriend Shehnaaz Gill to even walk through to the crematorium.

Now, in a hard-hitting post, actor Saqib Saleem has penned down his opinion on the same. He not only called out media for their hard-hearted coverage but also questioned celebrities for it.

Taking to his Instagram stories, Saqib began his heartfelt note by expressing how Sidharth Shukla’s death felt personal to him even though he did not know him in person. “The last few days have been really hard on a lot of us. Though I didn’t know Sidharth Shukla personally, somehow the loss seems personal. Such a young good looking man just gone suddenly. Can’t even imagine what his family must be going through.” Take a look at his note here: 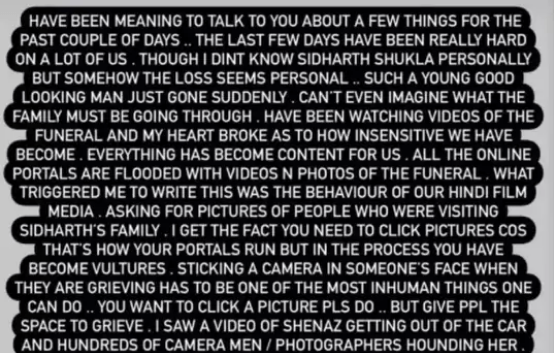 The actor then took a jibe at the paparazzi for ‘shoving their cameras’ into the grieving and saddened faces. He called it ‘one of the most inhuman things one can do’. He added, “I saw a video of Shehnaaz getting out of the car and hundreds of cameramen/photographers hounding her. Just for a second replace yourself with her.” 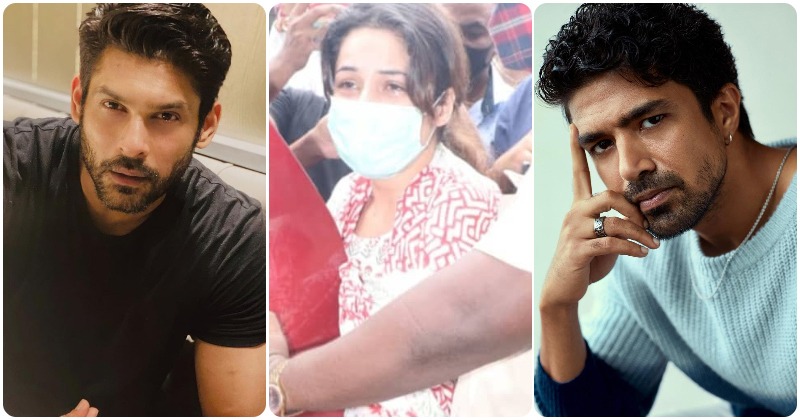 Saqib then went on to blame celebrity faces for all this and even called the entire thing ‘circus.’ He further wrote, “We (actors) have created this circus. We give these photographers access to our lives. From telling them what time to go to the gym, to what restaurant we eat at. Telling them our flight schedules so that they can come and click a picture and put it out. They charge a fee to do that and we happily pay them. This has been going on for a while but what this has done is that it’s made them look at us as an Instagram post. I am writing this to remind all of us life is beyond all of this. Life is about feelings, emotions, relationships.” Here’s what he wrote: 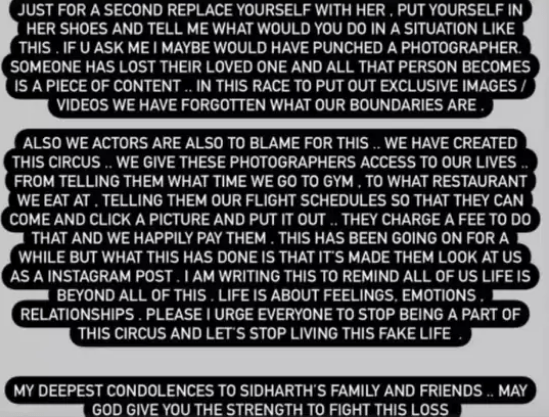 He then asked everyone to ‘stop being a part of this circus’ and ended his note by offering his condolences to Sidharth’s family.