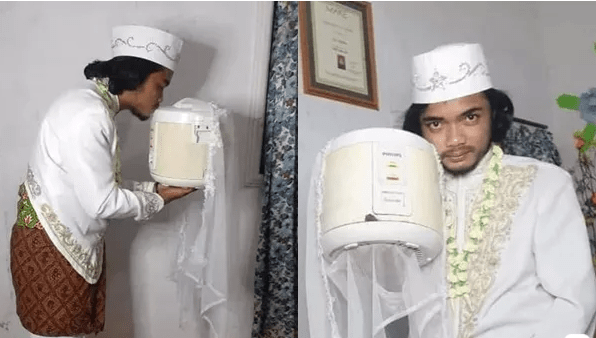 Photos of an Indonesian man marrying his beloved rice cooker have gone viral on Twitter. The man is seen dressed in white wedding attire while the bride wore just a wedding veil – well, she’s a rice cooker. Yes, the electric appliance used to make rice for everyday meals. The man in the picture is Khoirul Anam who posted the pictures on his Facebook page to announce his marriage with the rice cooker on September 20.

The man’s “wedding ceremony” to his beloved appliance went viral on Twitter after he shared a bunch of photos showing him dressed up in wedding attire, while the rice cooker donned a bride’s veil to make everything seem more authentic. “White, quiet, perfect. Doesn’t talk much, good at cooking, a dream come true. Without you my rice is not cooked,” Anam captioned the post. 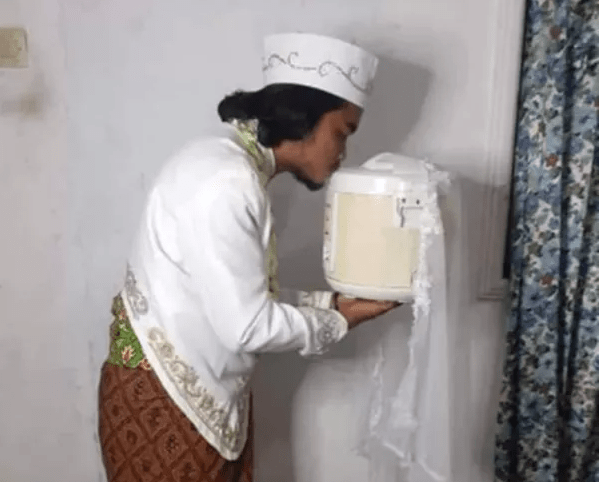 The photos show the bride and the groom posing together. In one picture, Anam is seen signing the wedding papers to complete the formalities to make the wedding legal. In another picture, he is seen kissing his bride. The photos have gone viral, garnering more than 44,000 likes and over 13,5000 retweets. People were left in stitches, and shared some colourful comments.

Netizens were left in splits, with some sharing the inanimate objects they’d like to marry. One user said, “Been thinking to do this with my air fryer.” Another shocked user asked, “Did this man marry his rice cooker?” Yet another wrote, “This is genius.” 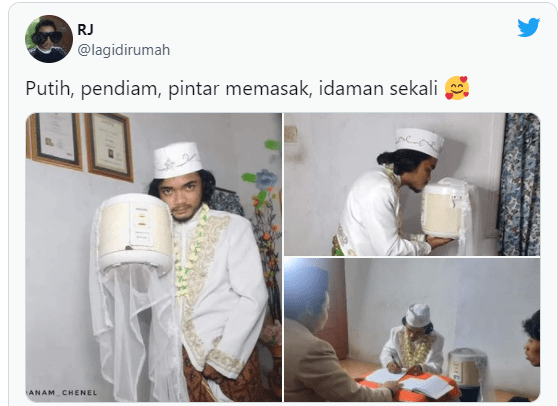 While the wedding pictures look all dreamy, the couple’s union was short-lived as four days later, Anam announced that he “divorced” his “wife” on Facebook. The reason behind the couple’s separation is that she is good at cooking rice but not good at making any other dishes.

Well, it turns out that the wedding and the divorce were all a joke. Anam is known to create humorous content on social media. It was revealed that Kahirol Anam is a creator who makes funny content for social media and this “wedding” was nothing but a prank.