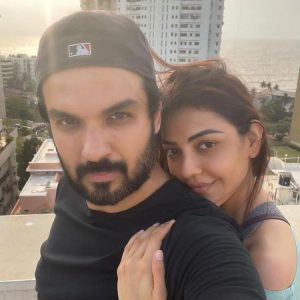 Celebrities are back in lockdown mode as Maharashtra imposes a Janta curfew. Kajal Aggarwal, who married Gautam Kitchlu at the Taj Palace in Mumbai in October last year, used Instagram stories to show her fans her daily regimen. She also suggested that they stay at home.

Kajal Aggarwal occasionally, and numerous times, post images with her spouse Gautam Kitchlu, giving us a glimpse into their lives.

Kajal Aggarwal took to social media to post a photo collage of her and her hubby working out together during this pandemic. Kajal had previously shared a pic with her hubby in which the two of them spent a beautiful moment together. Kajal Aggarwal and Gautam Kitchlu got engaged in June last year and married in a small wedding in Mumbai in November. The wedding was attended by the couple’s closest friends and relatives, and photos from the event went viral. On the work front, the actress will be featured in the upcoming film, Acharya.

Acharya is one of Tollywood’s most awaited films. Kajal has two Kollywood films in her kitty: Indian 2 and Hey Sinamika. The filming of Indian 2 has been halted, and the producers have yet to resolve their differences with filmmaker Shankar. Rakul Preet Singh plays the principal lady in the film. Hey Sinamika, on the other side, is directed by the choreographer Brinda Master. Dulquer Salmaan and Aditi Rao Hydari also star in the film.